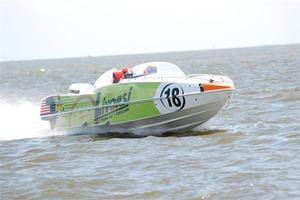 Livorsi Marine pilots Andrew Biddle and Tracy Blumenstein (pictured above) plus Pier 57, with Eric Treadwell and Jason Roesch aboard each took to the one kilometre course in Biloxi to see who would claim the initial speed record for the Panther class.

Livorsi Marine made the first pass setting a time that would remain on top throughout the 4-hour event. Despite several attempts by Pier 57, the two-way average speed of 68.286mph posted by Livorsi Marine established the first ever speed record for the Panther and SuperStock.

The UIM’s international speed record rules require competitors run the certified kilo course in both directions and the average times determine the official speed. Conditions in Biloxi were described as “hot and sticky” by the teams, with a cross wind coming from the South East. The course ran from East to West for the initial pass behind the famous Biloxi casino row, with the backdrop of the hotel casinos and their multi-tier parking garages providing spectacular viewing for the thousands of fans in attendance.

“We have had a fantastic day”, said pilot Andy Biddle. “We ran well in the match racing to take the pole, and managed to win the first two heats of the weekend. Taking the kilo record is just the icing on the cake for a great day here in Biloxi.”
The Pier 57 team also entered as a qualified ProAm boat within the APBA rules, and established the new mark for the ProAm Class 5 with a two way average speed of 65.516 miles per hour.

“By establishing these initial records we have set the mark for SuperStock teams around the world”, commented SuperStock USA promoter Martin Sanborn. “We look forward to seeing teams racing in Asia, Europe and the Middle East trying to break them.”