After recording a first and second place on the opening day at the P1 Gosport Grand Prix of the Sea, the Allam Marine team were disqualified in both races after losing their hatch in tough conditions on the Solent 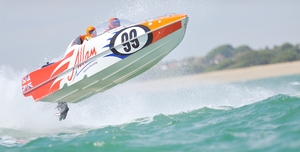 Having started the season in impressive form in Scarborough, Arran Scott and Gavin Feldt in the Allam Marine boat continued where they left off by mastering the punishing seas only to learn that the loss of their hatch in the opening race meant that they had to be disqualified from both of the day’s races.

P1 Chief Operating Operator Rob Wicks explained: “Whilst this may seem a peculiar decision, our rules dictate that all competing boats finish the race in their complete form – this includes parts such as the front inspection hatch and rear cowling. The ruling is based primarily on safety grounds but also for reasons of parity. I know the team will be upset by the ruling after fighting as hard as they did on Saturday, but this is a rule which has been consistently applied throughout our racing. I’m certain the team will bounce back from this disappointment and look to secure some valuable points in the final races today.”

With joint Championship leaders Flying Panther suffering technical issues yesterday and Allam Marine failing to score any points as the result of their disqualification, this leaves the Championship battle wide open and with even tougher conditions expected in the Solent today, it could well be a day of further surprises when the best strategy may well be to race to the conditions and simply finish to ensure points are scored.